Sydney bike rider and author Rosamund Burton has just published a new book, Whispering Wire, about tracing the Overland Telegraph Line from Adelaide to Darwin.  She wanted to move slowly across the country to absorb every detail of the journey. So Ros and her intrepid friend Fleur Dare set out to ride 800km from Adelaide to the outback town of Farina on their hybrid bikes - kitted out with thorn-proof tyres. This is the story of their inspiring trip. 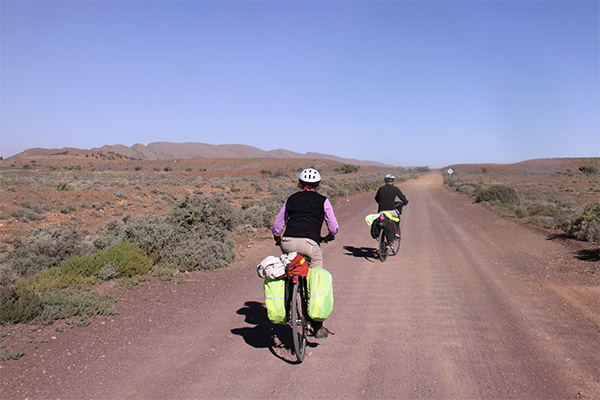 Heavily loaded bikes and a strong headwind! A tough day on the old road from Beltana to Copley
(Image: Rosamund Burton)

It was such a delight to start our journey following the River Torrens from the centre of Adelaide for 15 kilometres, before joining the Mawson Trail, the 900km cycle route to Blinman in the Northern Flinders Ranges. In the Mount Lofty Ranges, the view of the red gums and the grass trees with the ocean in the distance was stunning. But with heavy panniers and, in my case, not being very fit, not to mention getting lost, the first day was challenging. Some of the hills were so steep that we were having trouble pushing our bikes, let alone riding them! And the 30km we planned ended up being 46km. 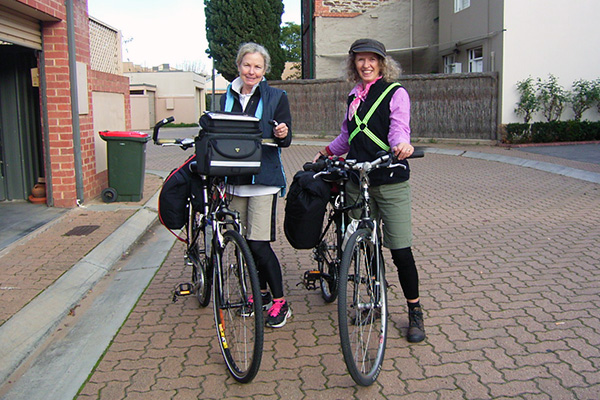 Ros and Fleur setting off from the centre of Adelaide (Image: Rosamund Burton)

So the second day from Woodside, rather than rejoining the Mawson Trail, we decide on the shortest and easiest route to Mount Pleasant and enjoy the Amy Gillett Bikeway, which runs along a disused railway track.

We stayed mostly in pubs or cabins. We initially cycled about 35km a day, and then increased our daily distance as we got fitter. We followed Mawson Trail when it took us on a fairly direct route along quiet back roads, fire trails and off road tracks.  When the Mawson Trail got circuitous, we found a more direct way.

We weaved our way through the Barossa Valley, stayed in Tanunda, and visited Maggie Beer’s Farm Shop in Nurioopta. In the Clare Valley we followed the 33km Riesling Trail, between Auburn and Clare, tasting Rieslings at Shut the Gate and Sevenhills wineries along the way. 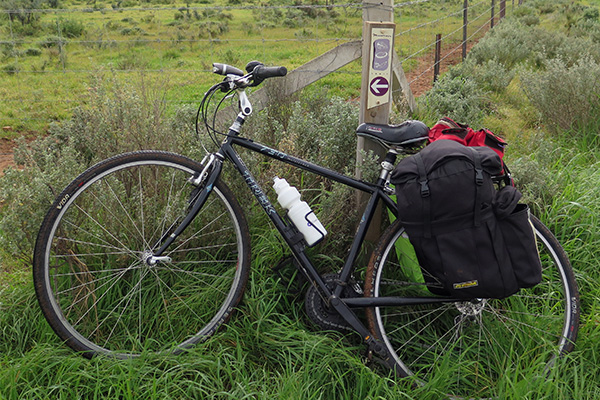 Signage to help walkers and cyclists find their way along the Mawson Trail (Image: Rosamund Burton)

After a few days on the road we fell into a routine, usually travelling for about five or six hours, and arriving at our destination in the early afternoon, giving us time to explore the town, buy supplies and chat to locals. In Spalding, to my excitement we were shown a piece of the original wire for the Overland Telegraph Line wire.

A highlight of our trip was reaching Melrose visiting the Over the Edge bike shop, where I had first heard of the Mawson Trail. Over the Edge does bike hire, and with 180km of bike trails in the area, Melrose is a mecca for mountain bikers.

Fleur and I left the Mawson Trail soon after, cycling over Horrocks Pass and taking the old road down to Port Augusta. By 1870 the telegraph line from Adelaide extended as far as Port Augusta, so the Overland Telegraph Line was constructed between here to Darwin. We strolled along the long wharf where shipments of camels were unloaded in the 1800s, animals which were to be vital for transporting supplies to the desert interior.

Two days later we took the Pichi Richi Pass to Quorn. From there we rode 67km along the main road to Hawker, where the local fuel station had a display of telegraph insulators. Having been cycling for nearly two weeks now we were covering longer distances every day. But the distances between towns was also greater, so we stayed in a cabin at Merna Mora Station one night, and met the owner who told us all about the history of the Overland Telegraph Line in the area.

The following evening we stayed at the Prairie Hotel renowned for its gourmet native and feral food. The next day took us to Beltana, once a thriving town, but now with a population of nine. Here we found the most southern of the 12 repeater stations built on the Overland Telegraph Line.

One of our hardest days was cycling along the old road from Beltana to Copley when we had a strong wind against us all the way. It was one of several days when we took refuge from the breeze in a culvert under the road to eat our lunch.

At Lyndhurst the bitumen stopped and we rolled onto a wide track. A couple of times we were passed by a road train or a 4WD loaded with Gerry cans and swags. This was truly the outback. 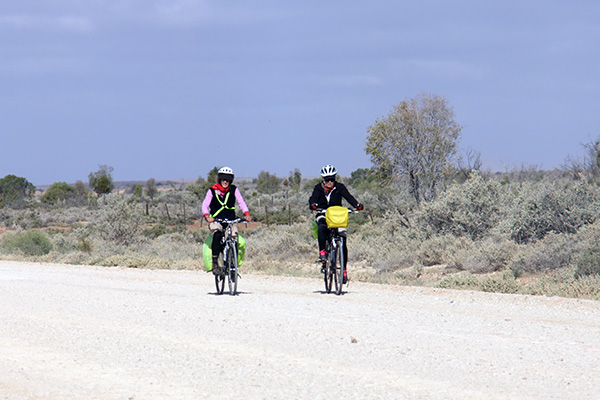 Getting close to Farina on a lonely stretch of outback road (Image: Rosamund Burton)

After 17 days on the road we reached the deserted town of Farina. We felt a great sense of achievement, but it was more about the joy of the journey – being on a bicycle every day, able to always stop to look at buildings, telegraph poles, or whatever else caught our eye, and talk to people.

Rosamund Burton is author of Whispering Wire: Tracing the Overland Telegraph Line through the Heart of Australia published by Wakefield Press, RRP $34.95.