We’re talking 500%! That’s the base estimate from both the UK and Queensland Governments. 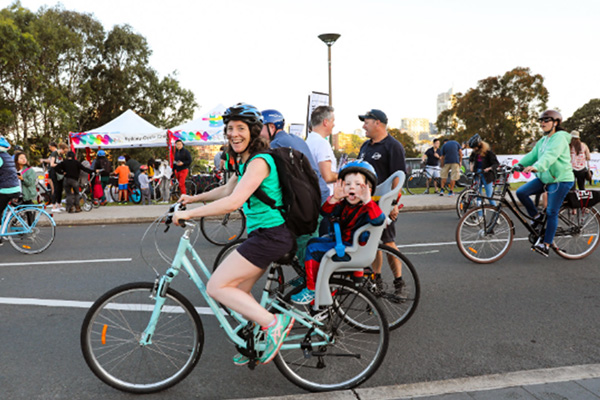 Aideen and son on the Gong ride, photo courtesy of City of Sydney

Both the Queensland and UK Governments agree that, at a minimum, every $1 invested in bicycle infrastructure returns a $5 net social benefit. The Value of Cycling, a UK Government study, determined that bicycle schemes ‘can achieve more for less, with benefit-to-cost ratios in the range of 5:1 to 19:1 – some as high as 35.5:1.’ The economic case overwhelmingly supports pedestrian and bicycle infrastructure for good reason:

Traffic congestion is a dead weight loss. Currently up to 2 million car trips under 2 km are made every day in Sydney. In 2019 congestion cost $19 billion nationwide and is estimated to cost 38.9 billion by 2031. Bikes take up an eighth of the road space easing congestion for all road users.

70 years of car-centric planning has come at a tremendous social cost. 25% of Australian children aged 2-17 and 67% of adults are considered overweight or obese. Obesity linked to physical inactivity is a major contributor to type 2 diabetes with estimates showing that eliminating obesity from the population can potentially reduce its incidence by over 40%. Type 2 diabetes is costing Australians up to $6 billion annually. By providing better infrastructure, millions of unnecessary daily car trips can be replaced by active transport.

Bicycle freight has a competitive advantage in city locations

Cost savings of micromobility range between 39% and 64% compared to a van-based service. This is because the same package can be delivered by an e-cargo bike up to ten times more frequently than a truck battling congestion. Bicycle infrastructure is much cheaper to install than motorway infrastructure with benefits that flow directly to all other road users.

Over the past decade, more than 12,000 people have died on Australia’s roads. In 2021 alone, the national road toll was 1,127 and for every fatality, around 30 people are seriously injured. We would not be tolerating this death toll in a war, so why should we on our streets? Given traffic violence is the primary cause of death among Australian children and young people, the need for active transport infrastructure including 30 km zones is urgent. Kids should be able to walk and ride to school without parents fearing for their lives. The annual economic cost of road violence comes in at more than $27 billion.

It can be hard sometimes to comprehend a streetscape that isn’t dominated by cars. But when comparing the economic benefits of parking spaces to active transport infrastructure, data doesn’t lie.

The replacement of one car parking space with a curb side corral for up to 12 bikes has obvious commercial advantages. Researchers in Portland and London found that whilst people who drive cars may spend more individually (due to additional boot space) pedestrians and cyclists collectively spend up to 5 times more over the course of a month. In the centre of Auckland, formerly known as City of Cars, parking was removed to make space for pedestrians. The transformation into a shared zone boosted retail on O’Connell St by 430%!

Bicycle riding is a clean form of transportation

In Australia, transport is the second most polluting sector of the economy responsible for 18% of CO2 emissions, mostly from tailpipe exhaust. In order to reach our goal of Net Zero by 2050, the UN has urged its members ‘to integrate cycling into transportation, improve road safety and promote the use of bicycles by people and businesses.’

‘Cycling is both a means to avoid the worst climate impacts and a means for adapting society to these impacts. To truly unlock the economic, social, environmental, and health benefits of cycling, we must start by strategically investing in better and safer infrastructure today.’ (Institute for Transportation and Development Policy).