Late last year, Bicycle NSW staff celebrated Christmas and the New Year in a fitting way by embarking on a guided electric bicycle tour of the city. 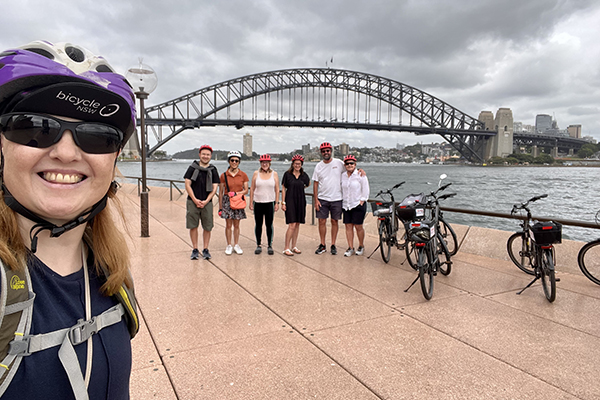 After meeting the owners (who were also our tour guides) and going through the necessary safety procedures, we set off on our adventure.

At a leisurely pace we embarked on a route that proceeded from Darlinghurst, through the Domain, over to Mrs Macquarie's Chair and around the Cove towards the Opera House. Following this, we rode through The Rocks, and across the Harbour Bridge cycleway and back. Finally, we continued through Barangaroo, Darling Harbour, and Pyrmont. After a quick coffee stop in Pyrmont Park, we returned to Darlinghurst where our enjoyable 3 hour 24km Sydney Harbour Discovery Tour concluded.

Grant and Linda provided insightful local knowledge with just the right amount of extra detail. Because of this, the Bicycle NSW team agreed that this brought familiar sights to life, in an unexpected way. There was definitely a sense of excitement in the group as we re-discovered the city.

The pedal-assist electric bikes had enough power to help us up the steeper hills on our sightseeing journey and made the ride easy without too much physical exertion.

The bike tour followed the safest routes mostly along shared paths, and although some of the ride is on-road we experienced only light traffic under the watchful and experienced eyes of our guides.

For some riders, having to leave the safety of shared paths causes nervousness and highlights the need for more bicycle infrastructure, especially separated dedicated bike paths where riders feel safer to cycle. As Bicycle NSW President, Melinda Tarrant said, “the increased number of separated bike paths and shared paths opened up areas we had not explored before in a safe, enjoyable way.”

All in all, it was the perfect end to the year! Bicycle NSW highly recommends that anyone interested in experiencing an electric bicycle tour reach out to the lovely and professional Grant and Linda at Sydney Harbour Bike Tours (website), where Bicycle NSW members will receive 10% off the value of a tour booking.