Bicycle NSW has recently made submissions about two masterplans in the Cumberland area that propose new and upgraded active transport along green corridors – the Duck River Parklands and the Prospect Pipeline.  Both corridors form key elements of Sydney’s Green Grid, a long-term vision for an interconnected network of open spaces across the city to encourage healthy living, enhance biodiversity and ensure ecological resilience.

We always try to visit sites before making feedback to understand the issues and opportunities of a project. We thank CAMWEST advocate Mark Robson for a really fascinating day out exploring the existing and future Cumberland bike network in glorious spring sunshine.

We met at Clyde Station near Parramatta to examine the 4.5 km section of the Duck River corridor that lies in the Cumberland Council area.  There are several attractive sections of good quality shared path, they are disconnected and broken by busy roads.  It is difficult to access or cross the river. Development has traditionally turned its back on the river, which once formed boundary of Auburn and Parramatta Councils and was neglected by both. 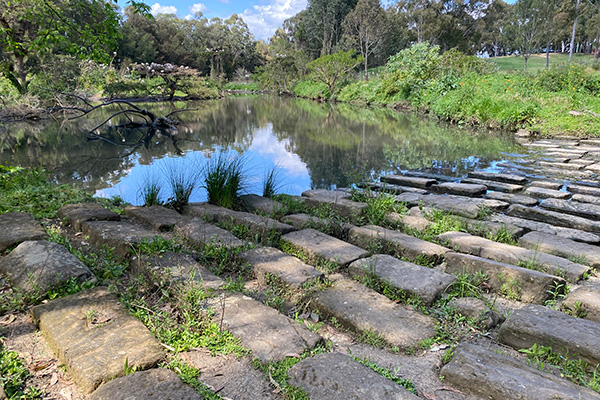 The stepping stones over the Duck River, are an important gathering site of the Wangal and Wategora Aboriginal clans. The Duck River is one of the more significant rivers to feed into the Parramatta River.
(Image: Bicycle NSW)

Council amalgamations have kickstarted integrated planning and the new masterplan.  The first step is a rebranding of the corridor as Duck River Parklands. New walking and cycling bridges and additional riverside paths will create a continuous and accessible north-south cycleway. There will be playgrounds and landscaped areas to picnic and play sport.

The route passes the thriving Auburn Botanic Gardens where the cherry blossom festival was in full swing.  Overflowing car parks highlight the need to create better access on foot or by bicycle!

Aboriginal use of the Duck River is reflected in traditional crossing points such as the ‘stepping stone’ causeway. The masterplan aims to celebrate both indigenous and industrial history.

The Cumberland section of the river ends at the incredible Prospect Pipeline.  We discussed several options for crossing the pipes and making the connection to the Canterbury Bankstown section of the Duck River corridor.  Connections south to Bankstown and north to the Parramatta River will be essential to integrate the Duck River Parklands into the regional active transport network.

The three 6ft pipes sit in a wide open space corridor which is perfect for active transport! The masterplan will see the corridor opened up for public access. There is already a sealed bitumen path. It will be a quick win for active transport to upgrade the existing path to a multi-user shared path – and it is level, direct and links important local centres. 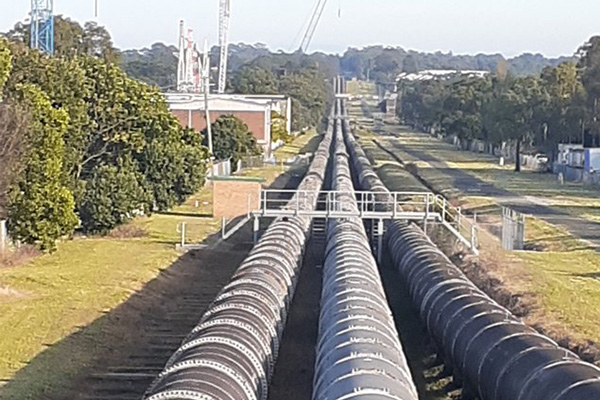 The Prospect Pipeline corridor stretches into the distance as far as the eye can see (Image: Sydney Water)

From Regents Park, we picked our way through residential streets next to the corridor.  Once past Guildford, there is a high-quality shared path adjacent to the corridor.  This is the start of the excellent route to Prospect Reservoir that was delivered during the heady pre-Olympic years when the NSW Government was working hard to ensure that Western Sydney extracted maximum benefit from the Games.

The pipeline ends at the Pipehead complex 1.5km west of Guildford. Now begins one of Sydney’s best cycleways!

The route from Guildford to the Prospect Reservoir follows the old open-air water canal that once fed water into the Pipehead.  In the 1990s underground piping was installed to move water between the dam in Prospect and the Pipehead. The canal was drained in May 1995 and the canal structure languished, leaving the community with the chance to gain a spectacular parcel of land for recreational purposes.

The NSW Government in-filled the dis-used water canal and created a cycleway/walkway following advocacy from local community groups. The shared path opened in 2003.

The edges of the canal structure are visible on either side of the path. The path is winding, reflecting how the canal followed a natural ridge line.  It is almost completely level, climbing just 77 centimetres over its 7.7-kilometre length — this allowed gravity to move the water slowly. 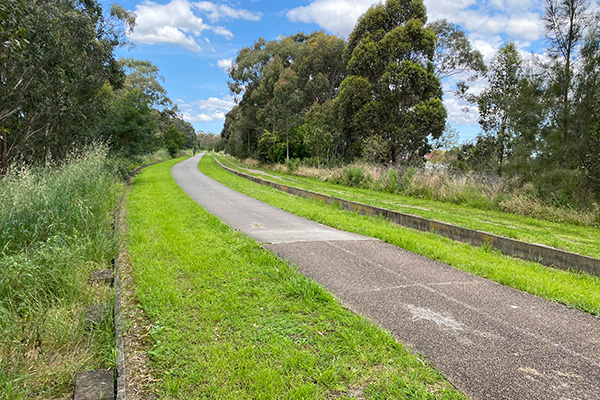 The Lower Prospect Canal cycleway. The edges of the canal are left exposed on either side of the shared path and hints at the history of the corridor and its importance for NSW public health. (Image: Bicycle NSW)

The most unexpected (and delightful) thing was the view out.  Sitting on a ridge, you can see out over Western Sydney in both directions. The Canal Reserve is one of the last remaining remnants of natural Cumberland Plain Woodland in the Sydney basin and contains a number of rare and endangered plant specimens. 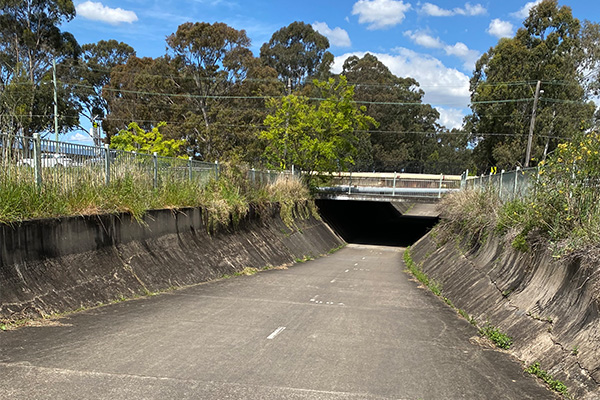 The canal was not filled in where it intersected with road and other infrastructure, creating easy underpasses for shared path users (Image: Bicycle NSW)

The highlight of the ride along the Lower Prospect Canal Reserve is the trip over the Boothtown Aqueduct at Greystanes. The bridge was created to move water across a valley, from west to east, using gravity. Opened in 1888 as part of the Upper Nepean Scheme, the aqueduct required expensive repairs and stopped operating in 1908. 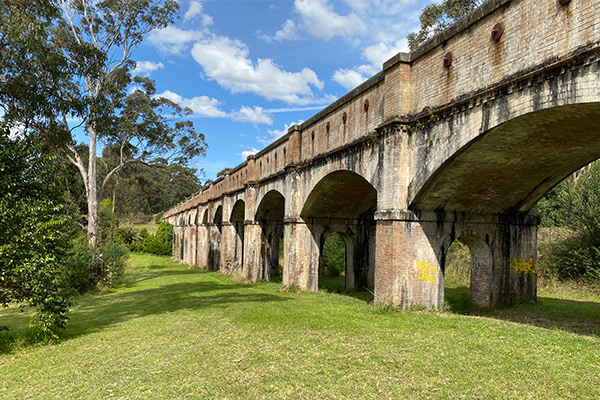 The cycleway crosses the top of the heritage Boothtown Aqueduct, which sits in a tranquil reserve at Greystanes. (Image: Bicycle NSW)

The masterplan for this section of the Prospect Pipeline corridor proposes upgrades such as wider paths, lighting, more facilities and new heritage interpretation.

At only one stage along the route do you need to cross a road - the Prospect Highway. In 2008, controversy raged as the NSW Government sanctioned the contractors to bulldoze the heritage canal structure. The highway was intended to improve access to the industrial area built within the Prospect Hill Quarry, Pemulwuy.  Canal Reserve Action Group (CRAG) advocates fought hard for a walking and cycling bridge aligned with the canal. The current signalised road crossing is not very safe or convenient. Our submission asks again for a bridge.

A similar project is envisioned along the Upper Canal, another Victorian feat of engineering which drops just 50m over 54km.  A cycleway adjacent to the canal would follow a near-level path along its full length from the Nepean Dam at Camden to Prospect Reservoir via the Mount Annan Botanic Garden and Western Sydney Parklands.  The Upper Canal has been identified as a priority recreational open space project for Sydney’s Green Grid.

The Lower Prospect Canal route ends at the Prospect Reservoir, a scenic and peaceful spot with a large picnic area, heritage Sydney Water structures and a path along the edge of the water.

An even longer trip!

We returned to Fairfield along another excellent green corridor – the Prospect Creek shared path.

Alternatively, you could create a bigger loop by heading south into the Western Sydney Parklands and then following the lovely Orphan School Creek Trail to Canley Vale and its amazing Vietnamese restaurants.

The Western Sydney path network stands head and shoulders above other parts of Sydney and should be much more famous.  We hope you will make a plan to jump on the train to Guildford or Fairfield and explore!

If you can’t get there for a ride, check out this video by Bicycle NSW friend Garry Robinson of BikeTrail.Blog  Garry has uploaded excellent maps and route notes for all the loop rides in the area here.