Sydney will begin celebration of the annual Gay and Lesbian Mardi Gras on the 18th of February. The festival has been held every year since 1978 and is the largest Pride event in Oceania. Its primary focus is on celebrating communities of people that identify as lesbian, gay, bisexual, transgender, intersex or queer. The festival's culmination is the iconic parade that usually proceeds down Oxford St, consisting of many performers and floats.

Much research has focused on the benefits of community to LGBTIQ+ communities. For bicycle riders, there are few better sources of community than engaging with a Bicycle User Group (BUG) - and in light of the upcoming festival, we'd like to showcase Sydney Spokes, Sydney's foremost LGBTIQ+ oriented BUG.

The History of Sydney Spokes

Sydney Spokes was founded in 1986 after Allan Hildon posted an ad in the local paper searching for people to cycle with. Out of the four people that went on the first ride, three went on to formalise the group as a committee: Peter Wilson, Les Clements, and Allan himself.

The name was chosen to be in line with a similar cycling group that Allan had heard about - a group called "Different Spokes." Different Spokes was a cycling group founded in 1983 in Southern California to promote cycling activities among members and friends of the gay and lesbian communities. It offered a wide variety of road and mountain bike rides within the greater Los Angeles area, as well as social events and weekend trips.

Since hearing about the group, Allan had wondered if a similar group could be formed in Sydney.

Sydney Spokes began with a schedule of rides each Sunday, mainly congregating around Centennial Park. Ride attendance varied from 10 to 20 cyclists, and ride schedules were communicated via post to a carefully maintained mailing list. The group also held the occasional weekend-away rides, where riders would travel to regional caravan parks.

Today, Sydney Spokes is one of Sydney's most prominent BUGs, with around 60 members, with half of those riding regularly. Riders come from all over NSW, from Inner Sydney to Prospect Reservoir. Rides are of varied grades and objectives, with both “social” and “training” rides. Social rides include sightseeing, regional rides and mountain bike rides. Training rides are more taxing and typically go for longer distances. 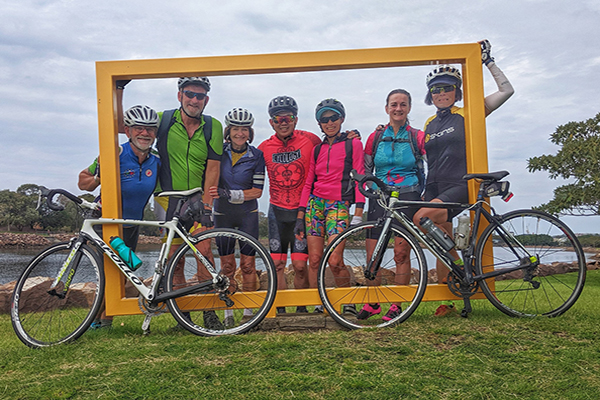 The group on a ride

Although the group enjoys riding all over NSW, Greg Rogan, president of Sydney Spokes, notes that the group still feels more at ease in some areas, such as Darlinghurst. However, Greg believes tolerance of different sexualities is improving across NSW, saying: “After a long struggle for acceptance…times are at long last changing for the better.”

If you are interested in getting involved with Sydney Spokes, we recommend checking out their website. On the website, they advise that all rides are open for prospective members to test the vibe out without pressure to continue. On the worth of Bicycle User Groups, Peter McLean, CEO of Bicycle NSW comments: “There are few better ways to connect with like-minded people than joining a BUG. Group bicycle riding has the capacity to bring people together like few other activities can. Bicycle NSW is proud to be partnered with Sydney Spokes and we urge anyone interested to check them out.”