The City of Ryde is currently seeking community input to create a Masterplan for three new active transport corridors, known as ‘Green Links’. 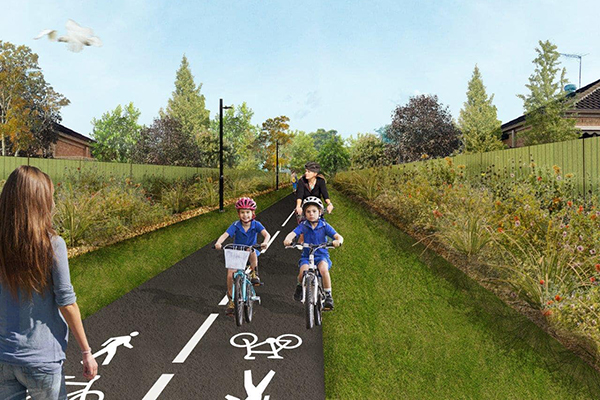 The Green Links will create new cycling connections, and extend existing ones, to complete critical missing links between:

The Green Links are linear open space corridors intended to be used primarily by walkers and bicycle riders, and include connections to other forms of "green" transport such as public transport. In keeping with their name, these corridors are often vegetated with an ecological restoration focus.

The masterplan will identify how these spaces can be upgraded and improved over the next 20 years to better serve community needs. In addition to the corridors, the plan also includes provisions for adjacent bicycle riding infrastructure such as bicycle repair stations, filter water stations, bicycle racks, as well as a BMX/MTB pump track.

“The Greens Links are supported by a raft of strategies at Council and State level and will form a very important part of the regional cycling network” said Bicycle NSW CEO Peter McLean. “Not only will the Green Links allow local journeys by bike to work, school, shops and public transport, but their strategic location between the Parramatta River and Lane Cove River will help facilitate longer trips across Sydney for commuting and recreation”.

Bicycle NSW is thrilled to see that the City of Ryde is making active transport a priority. The masterplan is open for community feedback until midnight on Sunday the 13th February. We urge all bicycle riders to provide comments and feedback on the plan at the City of Ryde website.  There is an online 5 minute survey or you can submit more detailed feedback in a letter or email. Our submission can be found here.

Bicycle NSW works tirelessly to advocate for bicycle infrastructure on behalf of all bicycle riders. If you’d like to support this effort, become a Bicycle NSW member today!