The City has added 11 regional bike routes which it wants built as separated cycleways.  These would join missing links and connect to neighboring councils in the Inner West, East, South and North of the city. 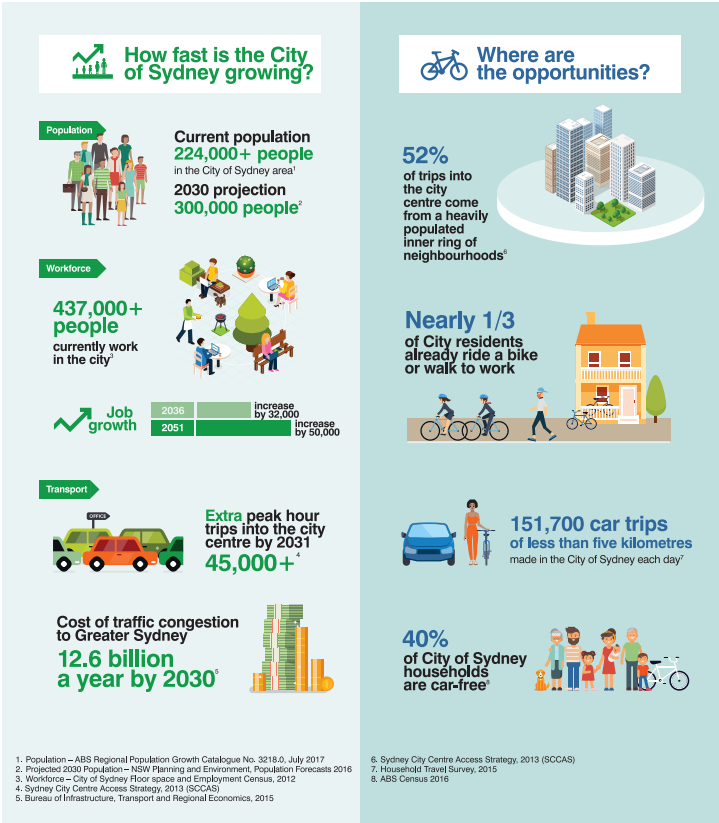 Image supplied by City of Sydney

Almost 2000 residents were surveyed as part of the plan and 72% of respondents said they would be “very comfortable” to cycle if there was a separated cycleway. This dropped to 21% for riding on low traffic streets, and only two per cent for travel on high traffic streets.

437,000 people currently work in the City of Sydney and this is projected to increase by 32,000 by 2036. Over half of the journeys into the city are from densely populated surrounding areas that could be reached by bike, and 151,700 car trips into the city each day are less than 5km.

“Congratulations to the City of Sydney for this plan to shift more journeys to bike riding. It will reduce congestion for everyone who needs to travel by car or public transport, and help a lot more people stay active,” said General Manager of Public Affairs, Bastien Wallace.

As expected criticism of the plan focuses on the potential loss of traffic lanes or on-street parking spaces.  This fails to recognise that better cycling facilities can be what convinces people they don’t need a car, leaving more space for those who do. More journeys by bike help reduce noise and pollution impacts on communities.

Bicycle NSW supports the City of Sydney plan and calls for the NSW Government to invest in infrastructure for bike riding to benefit everyone across NSW.