With bike riding participation rates decreasing around Australia, NSW is defying the trend. 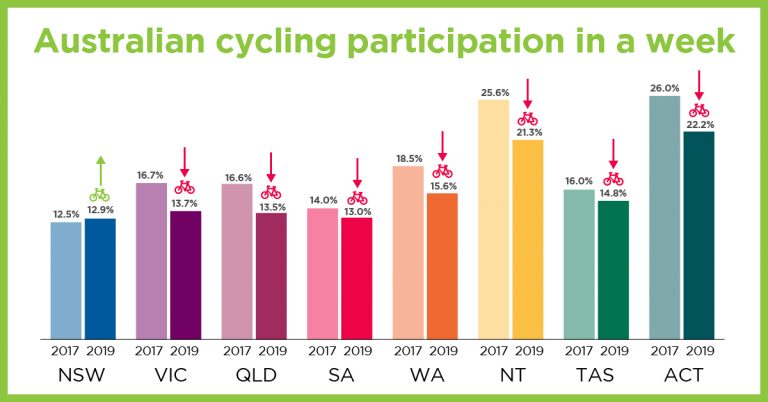 One probable cause of NSW defying the trend is bike share. Currently, 2.9% of NSW households have at least one active bicycle share subscription. This is the highest across Australia. NSW has a number of bike share operators including Lime Bike (Sydney), BYKKO (Newcastle), and MoBike (Sydney).  While in some Australian states there are no active bike sharing services. Ease of these services can make bike riding more accessible and accommodating for those who don’t own bicycles. Bike share services also provide for those needing to travel short distances.

A clear distinction between recreational riding (81.9%) and transport riding (31.7%) is still evident. Unfortunately, 72% of respondents in NSW stated they were not interested in riding for transport. However, they were comfortable continuing to use it for recreational purposes.

Overall NSW is last for cycling participation on a weekly basis compared to other states. Essentially, we sit in second to last place on a yearly basis at 32.8%. South Australia sits in last at 29.8%, and the Northern Territory in first at 43.7%. Time ridden weekly by NSW riders is the lowest at just 2.3 hours. There is still an uphill pedal for bike riding in NSW.

The Active Transport investment by the NSW Government of $256 million over four years is insufficient for a substantial increase in overall bike riding participation levels.

In local government areas where investments have been made on building connected cycling infrastructure, such as the City of Sydney and City of Parramatta, a clear increase in participation is evident for both transport and recreational purposes.

“With the continual population growth in NSW, we are calling on the NSW Government to invest more in active transport for the health of its residents and to help tackle congestion issues,” commented Bicycle NSW Communications Manager, Kim Lavender.