As with most BUGs, Kiama went with the flow in terms of COVID-19 restrictions last year. Regular rides were suspended for a time and resumed again under protocols recommended by Bicycle NSW.

An early casualty to the program last year was an inter-regional trip planned for Dubbo. However, Kiama BUG (KBUG) managed to have a few days away when around 20 riders headed to Narooma in November last year. 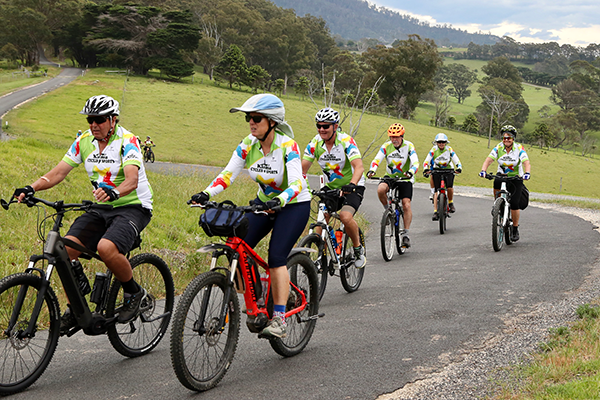 The Narooma appeal was just too much to resist. One of our members had recently moved to the area and was willing to share her new home’s local rides with us. When she moved south, she continued her love of cycling and joined the very active Eurobodalla Bicycle User Group (EuroBUG).

She now has extensive knowledge of the long cycling history dating back to the late 1800s in the Narooma region as well as a variety of riding trail options on her doorstep. We were very lucky to have her as our leader and guide.

Most riders were based at the very handy Narooma East Holiday Park located adjacent to the bicycle path. Rides were mainly on unsealed roads and tracks. The majority of riders had e-bikes but there were a few hardy non-ees who met the challenge of some decent hills.

The first day’s ride was a 50 kilometres loop from Narooma to historical Tilba and onto Mystery Bay. The beautifully situated Mystery Bay had remnants of the early era of Australian cycling. Circa 1895, the Bicycle Club of Corunna had a velodrome for competitive racing.

The second day was a 42 km ride around Wagonga Inlet with 821 metres of climbing with rewards of magnificent views of the surrounding coastline. Luckily, the group managed to get back before a big drenching from a storm.

The third day was the shortest of the three rides. It was a 33km ride starting a short distance north of Narooma on Eurobodalla Road at Bodalla. The route took the group along Reedy Creek to Morts Folly Road where the recovery efforts of last year’s devastating summer bushfires could be seen.

Kiama BUG has around 100 members, mostly retirees. They are a friendly group and enjoy their regular riding in the local and beautiful Illawarra Region. Inter-regional rides are offered at times throughout the year.

Rides are mainly on shared-pathways and roads that are more biker-friendly. KBUG members ride in a group under the supervision of Ride Leaders accredited with BNSW. A variety of rides are offered on different days throughout the week. Check the KBUG website for further information.