Since the introduction of minimum passing laws in NSW, in March 2015, 107 infringement notices have been issued for close passes, at the current rate of $344 each.  Since 2015, 41 people have died and over 3,434 have been injured riding their bicycle in a road related environment. 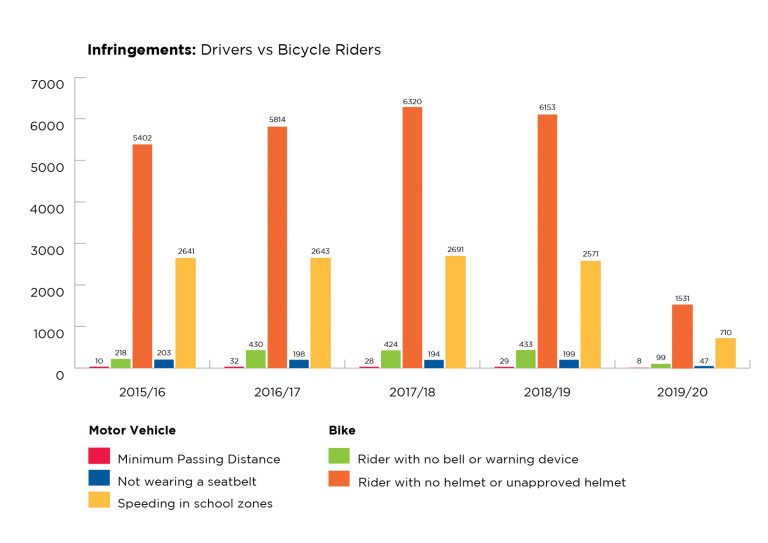 Since minimum passing laws were introduced and penalty rates were increased, 58,300 infringement notices have been issued to people riding bikes raising a total of $10,916,663.  Fatality rates for people driving cars have decreased. Rates of death and injury have risen for people riding bikes even though NSW has the lowest rates of regular riding of any Australian state.

37,224 infringement notices have been issued to bike riders and their passengers for not wearing helmets.  The current penalty of $344 is the same as for failing to wear a seatbelt.

If safety were the reason for harsh penalties and vigorous enforcement of helmet wearing, then more dangerous activities like close passing of a bike rider or speeding, especially in a school zone, would be as strictly enforced.

“A disproportionate penalty scheme and enforcement focus is discouraging people from riding bikes and failing to make the roads safer for those who do,” said Bastien.

We support the NSW Transport Minister Andrew Constance MP in his desire to reduce speeding, but if he wants to lower the fatality rate, penalties and enforcement need to target the most unsafe activities.

A Christmas present from Rob StokesJan 7, 2020