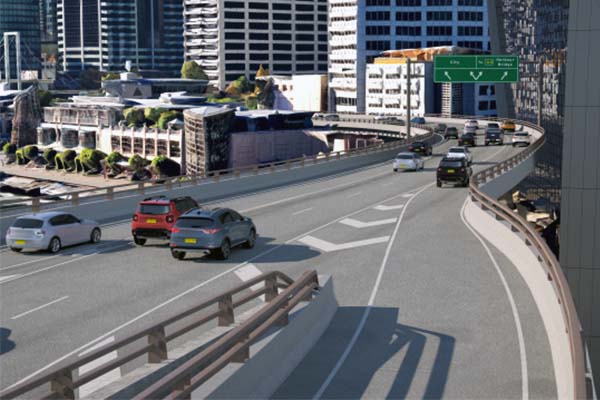 A view of the new on-ramp from Fig Street which is intended to eliminate risky merging and weaving as vehicles try to enter the correct lane to reach the Sydney Harbour Bridge or the city centre (Image: TfNSW)

Why are the Western Distributor Road Network Improvements being proposed?

Bicycle NSW has studied the Review of Environmental Factors (REF) and attended a webinar at which the project team explained Transport for NSW’s rationale for the changes.
The project is apparently needed to accommodate increased traffic as the population grows. The changes will improve safety and allow more reliable traffic flow at key pinch points.

But there is a problem with expanding road capacity

As (almost!) everyone knows, when you build for more cars, you get more cars. Induced demand - the dynamic in behavioural economics proven repeatedly and universally since the 1960s - means that additional traffic lanes will increase traffic congestion.

Upgrading an above-ground motorway that funnels more traffic into Pyrmont and central Sydney is completely at odds with Transport for NSW’s new Future Transport Strategy, the Movement and Place framework and a raft of excellent associated policies. It undermines ambitions outlined in the Pyrmont Peninsula Place Strategy (PPPS) and compromises Sustainable Sydney 2050’s vision for a liveable, decongested, decarbonised city. 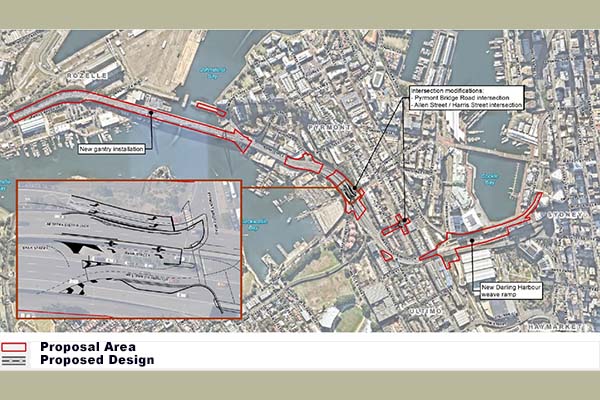 The footprint for the project to ‘improve‘ the Western Distributor between Anzac Bride and the Sydney Harbour Bridge (Source: TfNSW)

How does this project relate to Westconnex?

WestConnex was conceived to divert through traffic away from the CBD. From the Rozelle Interchange, vehicles heading south will go to St Peters to connect with the Gateway, the M5/M8 and the M6. Those going north will use the Western Harbour Tunnel to reach the M1. The demand for a route to the Sydney Harbour Bridge via the Western Distributor should be greatly reduced.

Why is Transport for NSW not planning to deprioritise the Western Distributor as a transport corridor? The hideous tangle of concrete that scars the heart of Sydney should be rationalised and gradually dismantled.  The huge swathe of land it occupies should be put to better use.

Are Transurban and TfNSW concerned that WestConnex will fail to reduce local traffic, as predicted by many transport planners? Will it instead drag more traffic towards central Sydney, choking up the shiny showpiece Rozelle Interchange before the construction dust has settled? Will inner Sydney be plagued by toll-avoiders who will still use surface roads and the Western Distributor?  Are the changes to the Pyrmont off-ramps an attempt to send the pinch point further east so Rozelle performs well for a little longer?

The changes make walking harder and offer nothing for bike riders

The new Future Transport Strategy focuses on moving people not vehicles. Streets should be managed primarily as public spaces where people can linger, walk and cycle. The speed and volume of traffic will need to decrease, particularly on arterial roads that bisect neighbourhood centres.

However, this project will widen intersections and remove important pedestrian crossings, making walking journeys less convenient.  The additional on-ramp and expanded off-ramps give space to cars that should be allocated to pedestrians and cyclists.  Harris Street will be swamped by cars and concrete trucks. How can Pyrmont Peninsula Place Strategy vision of Harris Street as a leafy, heritage high street for pedestrians, bikes and public transport be realised after these ‘upgrades’ have been made?

What happened to stakeholder consultation?

Transport for NSW did not bother to consult with the City of Sydney while it was busy preparing a 300-page REF, despite years of collaboration on Pyrmont and Ultimo planning strategies.

The project team has made significant efforts to minimise feedback and limit community input with a short exhibition timeframe that spanned school holidays. The poor consultation process does not engender public trust or allay community concerns that the process is being railroaded.

Our submission outlines the key issues for walking, cycling and sustainable place-based urban development.  It can be read HERE.

Transport for NSW is a huge organisation.  Unfortunately, new ideas about movement and place will take a long time to filter down through the levels of bureaucracy.  The Western Distributor proposal is hopefully the last gasp from a fossilised section of Transport for NSW that prioritises the Level of Service for vehicles and still hasn’t grasped the concept of induced demand. The project proponents are applying ‘predict and provide’ modelling rather than the ‘vision and validate’ approach now embedded in forward-thinking transport planning processes.

If you’d like to support Bicycle NSW’s advocacy to prioritise investment in walking and cycling infrastructure in NSW, become a Bicycle NSW Member. Members also enjoy comprehensive rider insurance and a range of retail benefits.