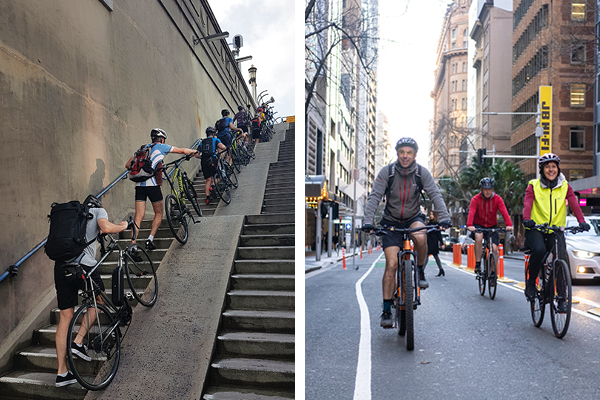 At the first, residents and the Mayor of North Sydney Council spoke against plans for a cycleway ramp to enable more inclusive access for riders trying to access the Sydney Harbour Bridge Cycleway.

In spite of Transport for NSW efforts to design alternatives and provide funding, Mayor Jilly Gibson and some residents strongly oppose a ramp that would increase accessibility for riders with small children, heavy bikes and disabilities.  The other end of the bridge couldn’t be more different.

Bicycle NSW also attended the City of Sydney Council meeting to decide whether pop-up cycleways would be retained and planned new infrastructure built. Lord Mayor Clover Moore spoke in support not only of the benefits cycleways offered users, communities, business and the environment, but of the role that Sydney as a global city needed to play in reducing carbon emissions.

Some residents and Councillors put forward objections, and plans to retain the pop-ups included changes and improvements to enhance safety.  But we are pleased the following cycleways are to be retained:

Moore Park Road and Fitzroy Street for 2 years till the Oxford Street Cycleway is completed.

Dunning Avenue with modifications and improvements to make it safer for cyclists.

The College Street and Liverpool Street Cycleways were not pop-ups but are incredibly welcome.  The restoration of the College Street cycleway torn out under Duncan Gay is something riders have been seeking for years, but the continuation down Liverpool Street and for the whole of Oxford Street will make thousands of cycling journeys safer every week.

The Pitt Street North Walking and Cycling Improvements were held over for discussion of whether this cycleway needs to remain where it is or be swapped to the other side of the street.

“We are incredibly pleased at this outcome, grateful to everyone who has made submissions, completed surveys and stood up for safe cycling in Sydney,” said Bicycle NSW General Manager of Public Affairs, Bastien Wallace.

“It is vital that wherever you live you support efforts by Councils and Transport for NSW to create safe cycling infrastructure.  Speak up, write in, tweet, message and share – because if there are more naysayers than supporters even the most visionary leader will lose the mandate to make your ride safer,” said Bastien.

With elections looming for many Councils in September, there has never been a better time to challenge your local Council member to do more for safe cycling.  If you make contact, why not tag us in @BicycleNSW #BicycleNSW