Revisions planned for the Sutherland to Cronulla Active Transport Link (SCATL) aren’t safe and need to be changed.

Bicycle NSW met with project managers on designs for the SCATL back in 2018 and we were pleased by the direct design proposed that used the rail corridor to provide a safe cycleway.  Sadly these designs were changed.

Now, instead of a safe connection that follows the rail corridor, bike riders will be forced onto the Kingsway footpath, alongside a busy multi-lane road where they have to cross over 27 intersecting streets and even more driveways – many with poor visibility of riders.  The redesigned route is steeper, less direct, requires continuous stopping by riders and does not provide a direct connection to the Cronulla CBD. 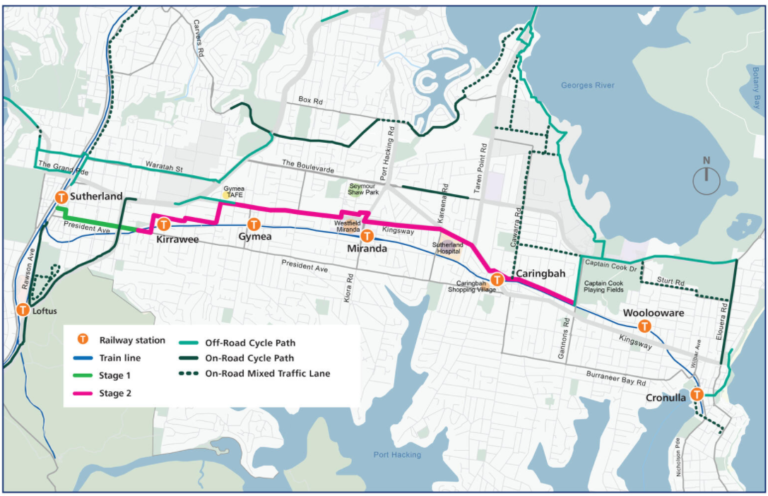 The Sutherland Shire Environment Centre a non-profit community organisation founded in 1991, has campaigned consistently for more safe cycling in the area and for a cycleway aligned to the rail corridor since 2006.  They have collected 3,000 signatures from community members who support SCATL, and they reached out to show us the safety issues inherent in the revised design.

“This modification to the original plan proposes a path that will make it difficult for drivers leaving and joining the Kingsway to see bike riders,” said Bicycle NSW General Manager of Public Affairs, Bastien Wallace.

“This is likely to lead to collisions, and we recommend returning to the original, direct and much safer design, which has strong community support,” said Bastien.

We recommend getting in touch with the project team and let them know that you want the design to be returned to the safe, direct plans originally proposed. To contact them email projects@transport.nsw.gov.au and to share your message tagging in: