Sean O’Shaunessy, long-time friend, journalist and Northern Rivers’ resident, recently purchased an e-bike. When I asked how he found it, he didn’t hold back:

‘My e-bike has been an absolute boon to my physical and mental health in this flood recovery landscape. It not only provides me with affordable mobility, but also a sense of adventure and wonder. Without it I would be trapped in a >1 tonne cage of steel, glass and fossil fuels costing the Earth. Now I feel like I’ve been granted the superpower of riding up any hill with the power of my own legs and the sun’. 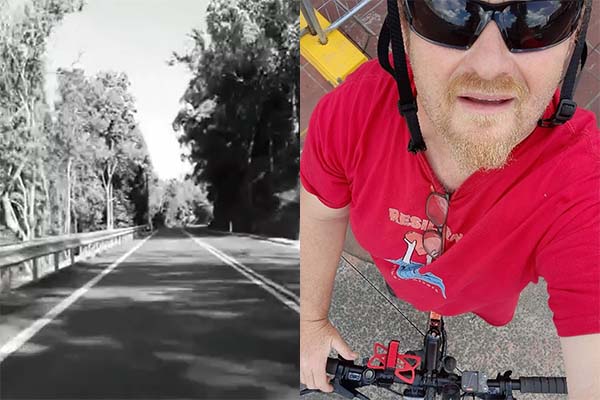 Sean hosts a podcast on Lismore’s River FM called Environmental as Anything, and advocates strongly for climate justice. For Northern Rivers’ residents, many of whom lost everything in the 2022 flooding catastrophe, climate change is a matter of social and economic survival. Low-lying Lismore has always been flood-prone, but the frequency and severity of recent events have called into question its very future.

Following the monster floods in 2022, petrol was scarce and roads were rendered inaccessible except by bikes.

Even with some roads repaired, rising fuel costs are forcing many to evaluate when the car is needed and when it isn’t. Transport is a major cost of living issue, with additional pressures for residents of regional NSW, where travel distances are longer and public transport is limited (or non-existent). Reducing trips in order to save on fuel bills compounds feelings of social isolation and mental distress – a major concern for people in the bush, especially the flood survivors.

For most trips (including supplies), Sean now leaves his heavy vehicle at home and rides up bush tracks and along country roads on his e-bike:

‘Now I quietly zoom through the fresh air and sunshine, riding to work, shopping and socialising.’

Being able to safely ride and walk is a fundamental social equity issue. Because 25-30% CO2 emissions come from transportation, mostly cars, it is also an environmental necessity. That is why the UN General Assembly moved a 2022 resolution urging countries to promote everyday cycling.

This is what Bicycle NSW has been advocating for over our 47-year history. One of our most recent wins was the passing of the NSW Transport Administration (Railtrails) Amendment Bill (2022). The Northern Rivers Rail Trail can now be built, enabling locals and visitors to ride from Lismore to Byron Bay, or Casino to Murwillumbah in comfort and safety. Rail trails are an international movement connecting communities and boosting local economies offering e-bike charging, sales, maintenance and rideshare services.

To alleviate cost of living pressures, reduce congestion and CO2, we are now calling on the State and Federal Governments to back e-bike subsidies now.

‘If we are serious about decarbonisation, we need to include e-bikes in the discussion on EV subsidies’, said Peter Mclean, Bicycle NSW CEO. ‘E-bikes are, on average, 30 times cheaper to purchase than an EV and 40 times more energy efficient to produce.’ 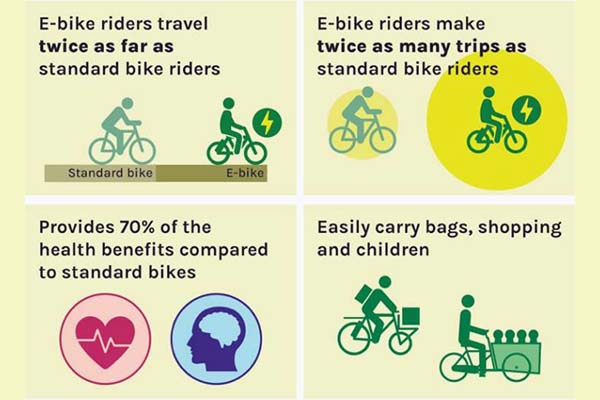 E-bikes have so many advantages! (Image courtesy of The Micromobility Report)

Whether you live in the city or the bush, access to safe active transport is a fundamental human right. We’d love to share your e-bike experiences on our social page. Come and join the Bicycle NSW family now for a fun, safe and sustainable future.