Both the Oxford St Cycleway and the King St Cycleway were approved to go ahead at a City of Sydney council meeting on Monday the 21st February 2022. 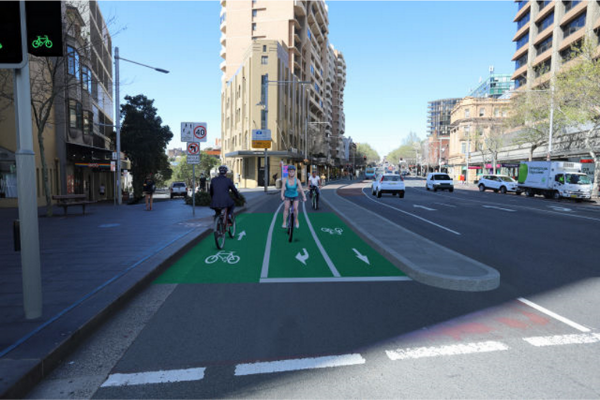 Oxford Street is one of the busiest bike routes in the city, with more than 2,000 bike trips every day. The new path is expected to double bike trips in the first 12 months, if trends seen with other bike paths (such as the Pitt St Cycleway) are repeated. The proposed 1.7km separated cycleway is intended to run kerbside between Taylor Square and Castlereagh Street, connecting the city centre with the eastern suburbs and with other major bike routes.

The current concept plans for the permanent, higher quality 2-way cycleway on the north side of Oxford and Liverpool Streets were developed following general consultation for a centre running pop-up cycleway on Oxford Street in 2020, and the recent approval follows extensive community consultation on the new cycleway design. Feedback from key stakeholders, including Sydney Gay and Lesbian Mardi Gras, Sydney Anzac War Memorial, Woollahra Council and local community and business leaders were taken into account.

The King St Cycleway is intended to run along the north side of King Street, crossing Castlereagh, Elizabeth and Phillip Streets with a parallel pedestrian and bike crossing next to the NSW Supreme Court, creating an essential cycling connection between the Pitt St Cycleway and East Sydney.

The addition should help connect the Pitt St Cycleway with other arterial bike paths as well as calm traffic and make the street friendlier to pedestrians.

Join Bicycle NSW today and be part of the movement to create a better environment for all bicycle riders.