NSW as a state, and Sydney as a city, won a dubious first place for the longest commuting times in Australia.

This is based on the Household Income and Labour Dynamics in Australia (HILDA) survey of over 17,000 Australians. Too much time spent commuting by motor vehicle is bad for physical and mental health.

For people like tradies who need to carry lots of equipment to work, or who travel long distances walking or travelling by bike isn’t feasible. But according to the HILDA survey 28% of workers live and work in the same postcode and 55% worked within 10km of where they live, and only 11% of people live more than 30km from work.

This adds up to a lot of relatively short journeys taking longer than they should.  Without significant investment in active transport infrastructure, NSW won’t achieve the mode-shift necessary to reduce congestion on the roads and public transport.

Bicycle NSW has lobbied for and written about the comparatively low levels of funding allocated to cycling and active transport by the NSW Government. But a picture speaks 1000 words so we compared the funding expenditure on each of the transport modes.

Commutes on different modes of transport 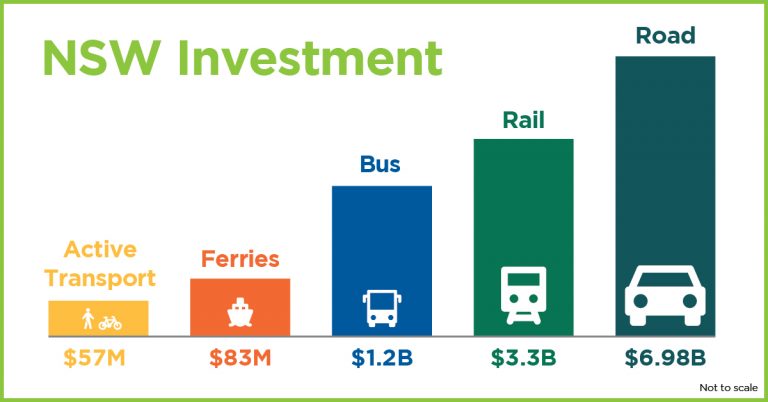 “People in NSW are struggling with the impact of long commutes,” said General Manager of Public Affairs, Bastien Wallace.

Bicycle NSW encourages everyone to let their local MP know they are sick of congestion.  Why not share a picture or story of your commute and ask them to help people with short journeys to travel by bike?