Over 10km of pop-up bike lanes have been delivered around Sydney’s CBD in a partnership between Transport for NSW and the City of Sydney. 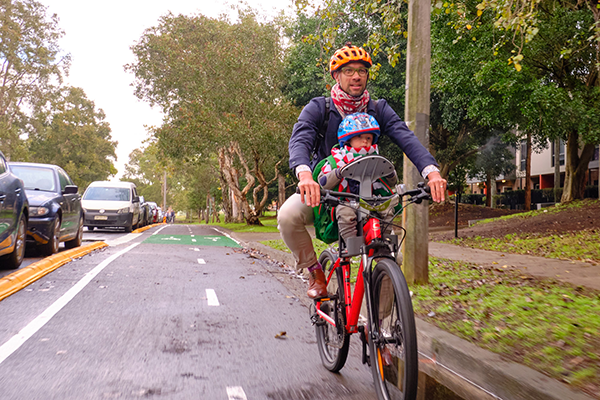 A key public health measure, COVID-19 pop-up cycleways are designed to make it easier and safer to ride.

Transport for NSW has been implementing changes across the State’s roads and transport network to ensure customers and Transport staff can move around safely during the COVID-19 pandemic.

Along with Sydney’s existing bike network, pop-up bike lanes are designed to people ride to employment, shopping, and education hubs – providing an alternative to catching public transport or driving.

Excitingly, these pop-up cycleways are being well used with almost 15,000 weekly trips, according to Transport for NSW.

Since 15 August, use of five pop-up bike lanes has increased approximately 7% week on week.

In June 2020, the Sydney Harbour Bridge cycleway saw a 3% increase in bike riders from the same time last year despite significantly reduced numbers of people working in the CBD and North Sydney, while the M4 cycleway in Parramatta saw a 200% increase in riders.

The Hawthorne Canal in Leichhardt saw a 170% increase and the Como Bridge in Oatley saw a 70% increase in riders compared to the same time last year.

Transport for NSW has also announced plans for more pop-up bike lanes across Sydney, in locations such as the city’s North Shore, Inner West, and Eastern Suburbs.

Even bike stores are benefiting from this uptake in riding. A recent survey by Bicycle Industries Australia found between January to June 2020 bike sales were more than double the same period the year before. E-bikes sales had more than tripled and bike servicing was up by 12%.

“If you like the pop-up cycleways we encourage you to write to your local council, MP or Transport for NSW and let them know. They need your support to help them stay and to build more,” said Alistair.

We encourage you to email us (using info@bicyclensw.org.au) your pop-up cycleway photos or tag us in on social media using @bicyclensw so we can help share the love.