Stage One of the Parramatta Light Rail is getting close to the finish line.  It has been a painful and disruptive process – including for bike riders – but installation of the 16 stops is underway, the first trams have arrived from the factory and passenger services are due to start in 2024.

The plans for the Parramatta Light Rail Stage Two have recently been on exhibition.  The route will link rapidly growing communities to the north and south of Parramatta River to the Parramatta CBD.  Light rail will enable major urban renewal at Camellia and finally connect the residents of Wentworth Point with jobs, services and public transport hubs. 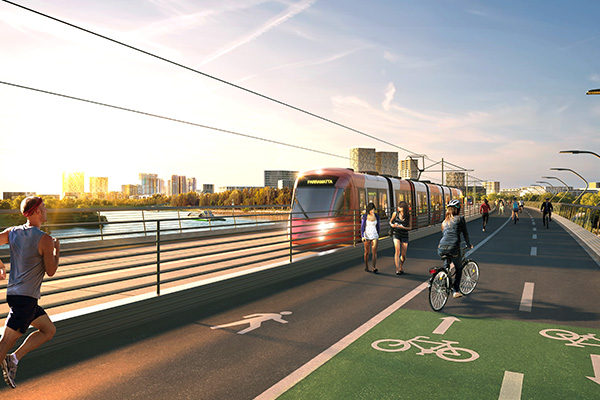 Plenty of space for active transport is promised on the new bridge linking Wentworth Point to Melrose Park (Image: Transport for NSW)

An 8.5km Active Transport Link (ATL) between Camellia and the Carter Street precinct will run parallel to the light rail tracks and connect to existing and proposed active transport networks in the City of Parramatta and City of Ryde.  The ATL builds on the 5.7 km shared path delivered with Parramatta Light Rail Stage 1. 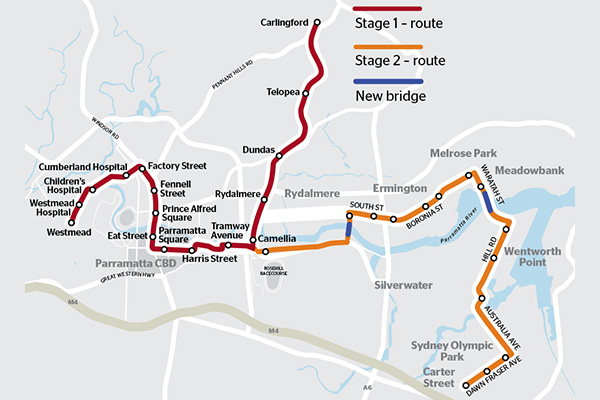 The route for Stage One (in red) and Stage Two of the Parramatta Light Rail (Source: Sydney Morning Herald)

The proposed light rail and active transport bridges are particularly exciting.  The bridges will deliver two vital connections over the Parramatta River, linking Rydalmere to Camellia, and Melrose Park to Wentworth Point.  They will be free of noisy, polluting cars, trucks and buses.

Is it fantastic that early funding has been secured to design and deliver the Wentworth Point Bridge well in advance of an operating PLR2. This bridge will hugely improve active transport links in the Parramatta growth area by connecting the Parramatta Valley Cycleway with Wentworth Point, Rhodes and Olympic Park.  New walking and cycling ‘loops’ will be created to encourage active lifestyles and attract both residents and visitors. 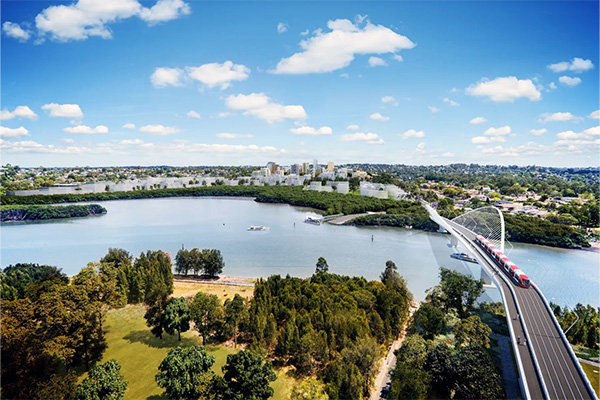 The project is designed to use existing road corridors. This is fantastic. The insertion of light rail into the road network will rebalance the way streets are used.  Parking and vehicle lanes will be removed to create sufficient space to accommodate walking, cycling, light rail tracks and landscaping.

The transformation of streets by reallocating road space from the movement and storage of cars to create landscaped multi-modal public spaces is a very encouraging step forward for place-making in Western Sydney.  It is an approach that aligns with NSW Future Transport Strategy and two pivotal 2021 policies that require NSW Government projects to prioritise road space for active transport - Road User Space Allocation Policy and Providing for Walking and Cycling in Transport Projects Policy. 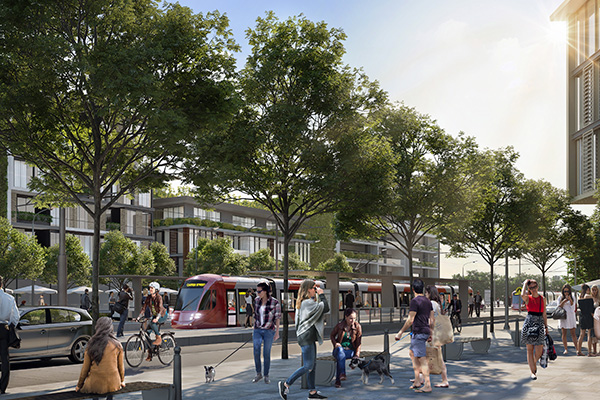 An artist’s impression of a multi-modal street in the future Carter Street precinct, a state-significant renewal area to the south of Sydney Olympic Park that will soon accommodate 14,500 residents (Image: Transport for NSW)

Parramatta Light Rail Stage One has excluded bicycles from large parts of the Parramatta CBD. This undermines the great good that can be achieved by the transformation of traffic sewers into multi-modal transport corridors, and it is at cross purposes with the project aims and supporting documentation.

Bicycle NSW has written a detailed submission which is generally supportive of Stage Two.  However, we advocate for issues around bike riding in the Parramatta CBD to be resolved as a matter of urgency and not repeated with Stage Two.

“Bicycle NSW would like bicycles to have full access to CBD streets.  As previously suggested, track inserts should be used in locations where paths cross at acute angles. There are translatable solutions that have been developed in different parts of the world to make tram tracks safer for bicycles”, says Bicycle NSW CEO Peter McLean.  “We would welcome participating in a trial with Transport for NSW”.

We have been reassured that the Stage 2 alignment has been carefully planned to ensure that crossing points are always close to right angles.  We will monitor this closely as the designs are developed in more detail.

A Look at Progress in Rozelle

Will the Warringah Freeway Upgrade improve riding and walking?